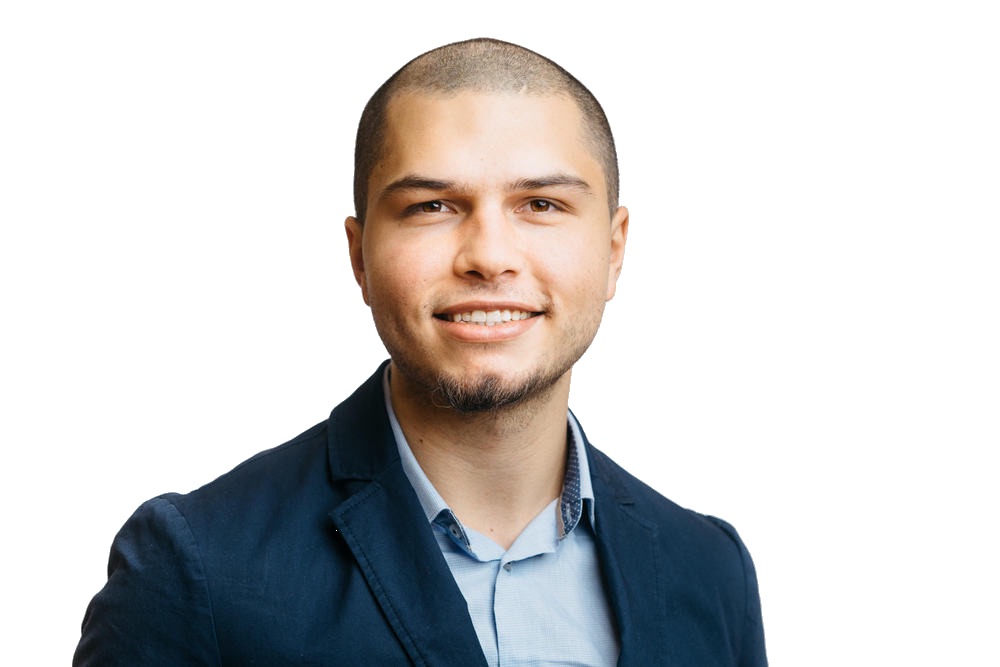 When you share your code with other people, it may not immediately work on their machine. They haven’t installed certain packages, they have a different R version or maybe another operating system. These issues are called dependency problems. Basically, one system needs another system in order to function properly, in the same way that one package needs the installation of other packages to function properly.

This is where Docker comes in. Docker solves all reproducibility and dependency problems.

First of all, I would like to express my gratitude to Michał Ludwicki. I had some difficulties setting up the googleCloudRunner package, and he created an entire github repo with examples just to show me how it works! In addition, he spent an hour with me on Skype. Thanks dude, you are great :)

Also, I would like to thank Mark Edmondson for creating the fabulous googleCloudRunner package.

In this tutorial, you will learn:

This offers many advantages:

First of all, connect to Google Cloud

Then, click in the the top left corner as displayed in the image below, and finally click on “new project”. 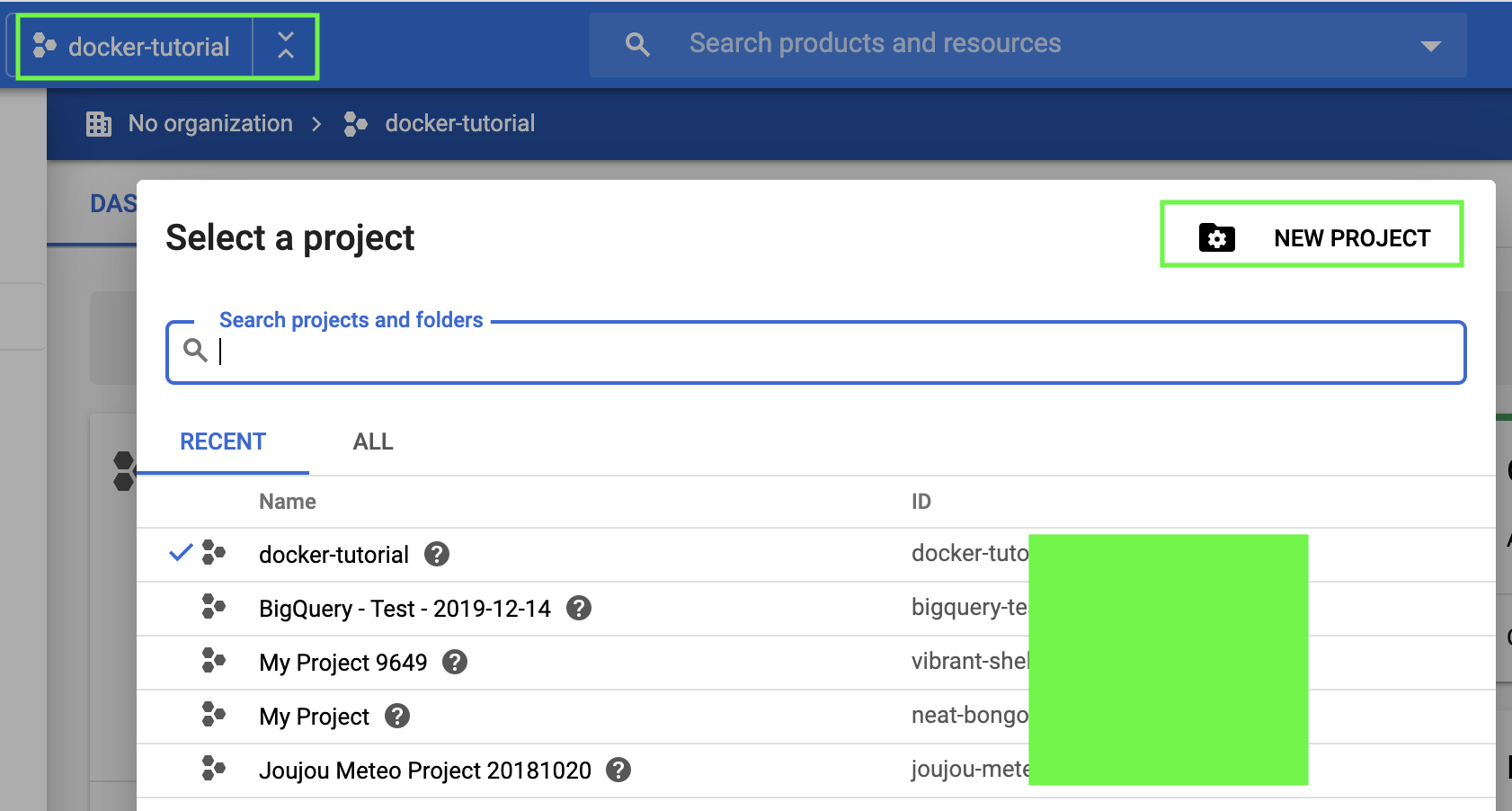 Finally, give a meaningful name to your project and click on “create”.

You need to activate billing in order to use your Google Cloud account. This is fine for this tutorial, as new clients get a $300 free credit. 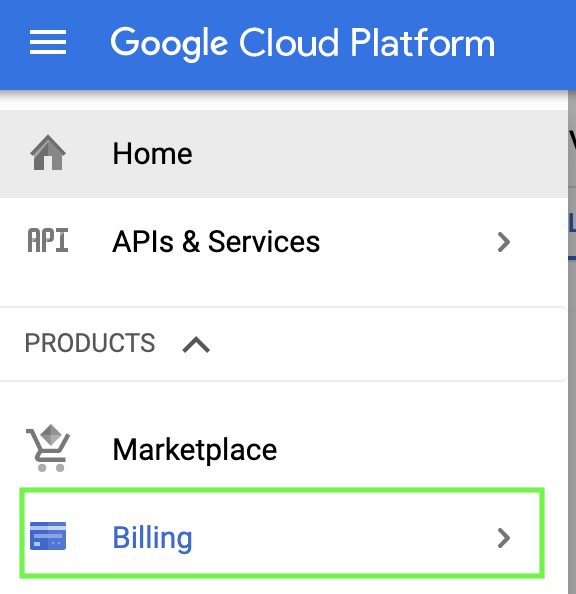 How to activate APIs on Google Cloud

Once you have a Google Cloud Project, you need to activate its different services. For instance, if you wanted to use big query to store your data, you would need to activate the Big Query API.

For this tutorial, we’ll need to enable the following APIs. Please, do not proceed before you have enabled all the APIs enlisted here, otherwise certain services may not work later: 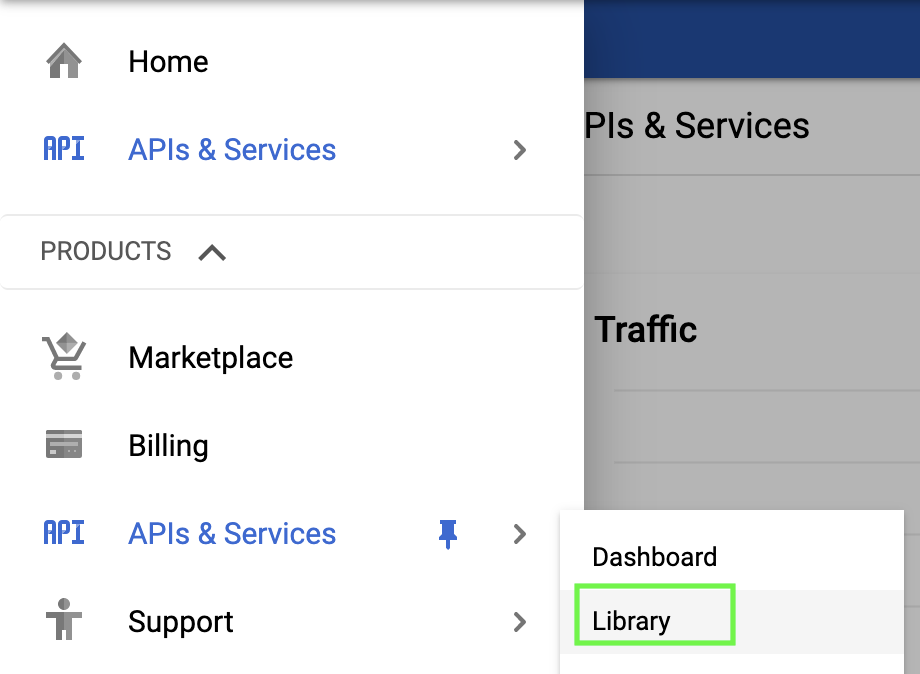 Once you find an API, click on it and enable it. Once you have enabled it, you should see something similar:

Before configuring our credentials, we need to configure the OAuth consent screen. To do so, go the following section: 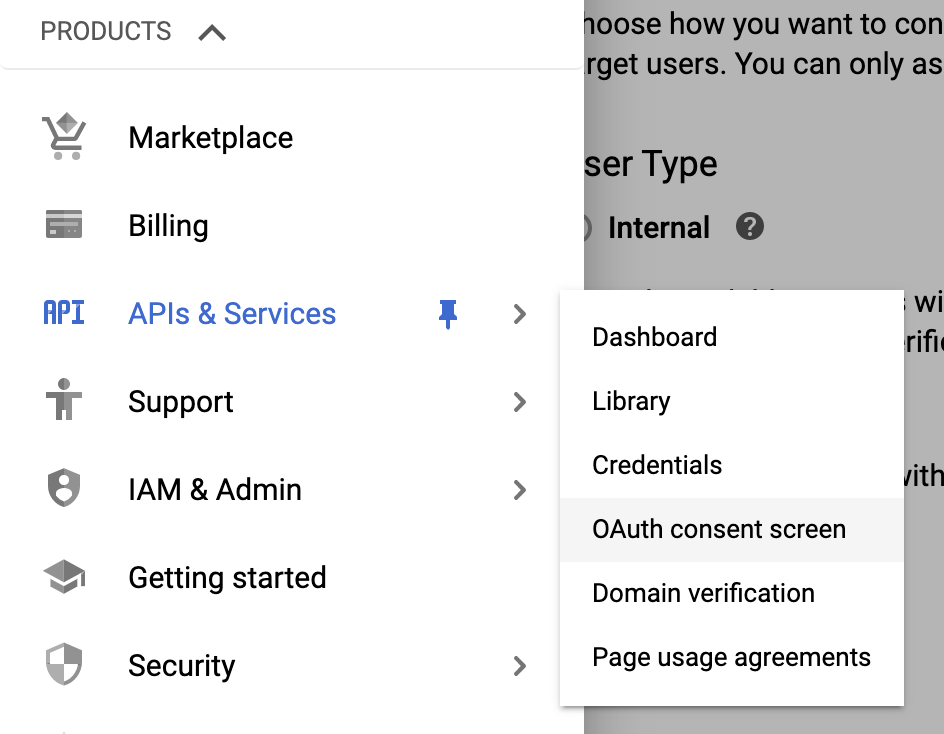 As a user type, select external: 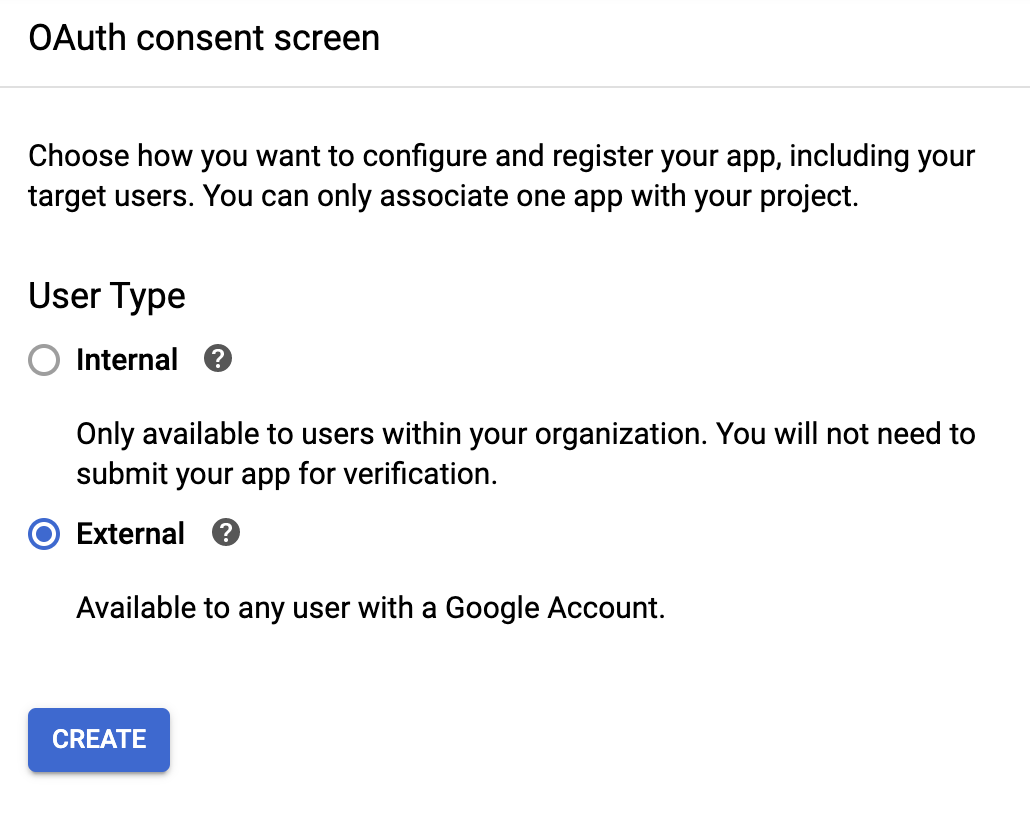 After you have given a name to your application, click on scope, and add all APIs present: 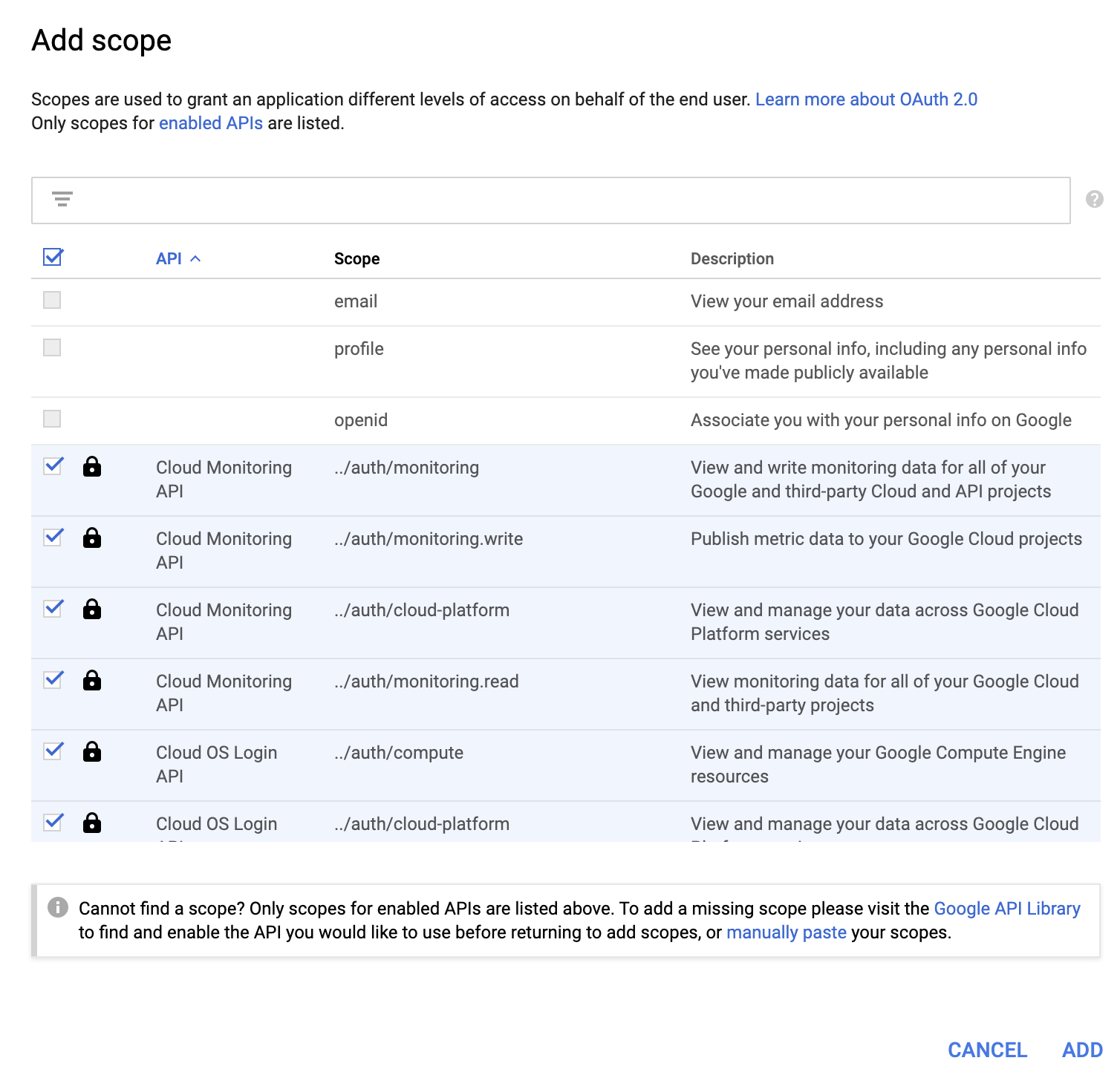 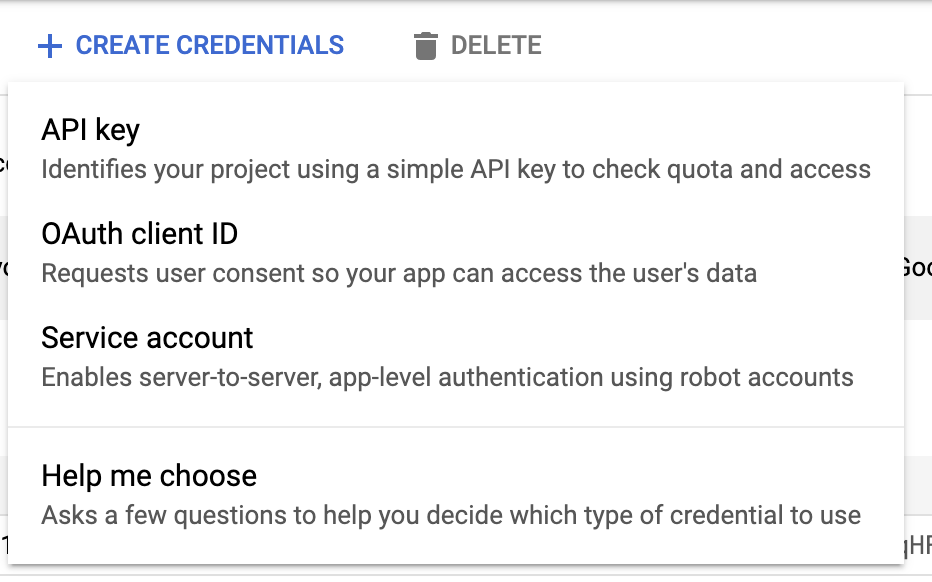 For the OAuth client ID, select “Other”:

When you create Service Account, enable all the roles that you see in the image below: 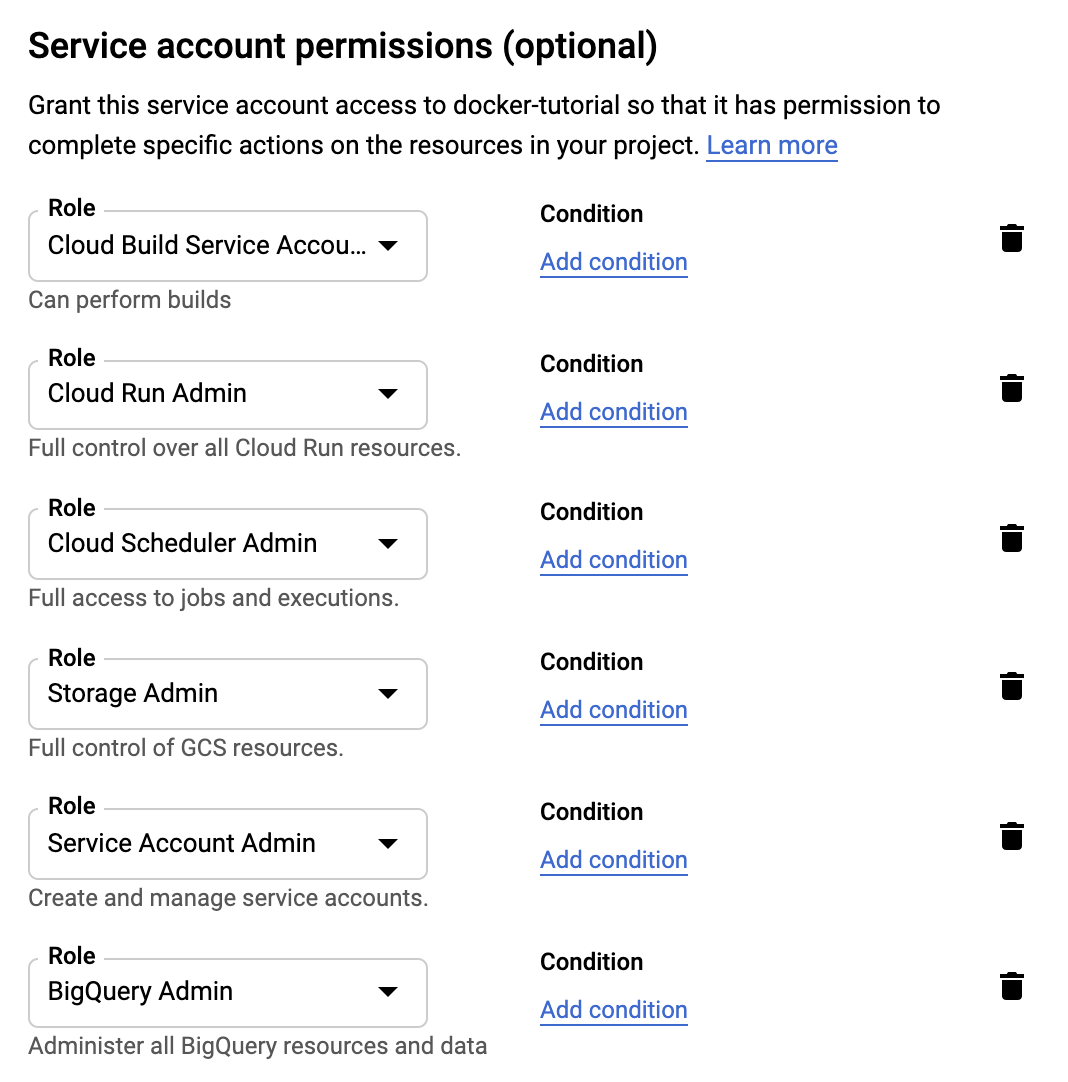 We’ll use this to connect to big query in a non-interactive session.

Save this somewhere in your computer as we’ll use it later.

Type “bigquery”” in the search box and click on it:

Big query is formed by 3 components:

On the bottom left of the screen, you can see the different projects:

Click on the project that you created for this tutorial. It has a name similar to your Google Cloud project.

Install and load the “bigrquery” and “tidyverse” packages:

Now you have authenticated with big query and can make calls to the Big Query API.

Define three variable that contain our project, dataset and table name (I know, we don’t have a table yet):

The following code will create a new table on big query, which contains the current time:

Once we have created a new table, we don’t need to use the following command any more, as the table already exists:

We can simply append new values:

If you have done everything correctly, you should see the current time appended on your big query table:

Now, you have made a call to the BigQuery API and added data to a table by using R. How cool is that? :D

How to configure Docker

First of all, install Docker. Here is the link for mac.

How to run an existing docker container

As mentioned at the beginning of this guide, one of the big advantages of Docker is shareability, that means that you can create docker images and share them with others.

The guys at the Rocker Project have already created several basic images that we can run. For example, they have created an image with rstudio preinstalled: rocker/rstudio.

Go to the terminal in R and type the following code.

If the image is not present locally on your machine, your computer will look for it on docker hub (similar to GitHub, but for Docker Images), and if it exists, it will download it.

The “-e” argument stands for environment. Here we can define environmental variables such as “PASSWORD” and “-p”, which stands for port. The final argument “rocker/studio” is the docker image that we have downloaded and run as a docker container.

Now you have an instance of Rstudio in your browser! Isn’t that cool? :D

Now, you can click on “stop” in the terminal to halt the docker container.

Dockerfile is the file where the instructions on how to create a docker image are contained.

Create a new folder a make sure that the folder contains the following files:

Here is an example:

Here is the script that we’ll use. Copy it and save it in your folder under “big-query-tutorial.R”. Don’t forget to change the name of your Service Account Key, the email associated to it and the big query project, dataset and table parameters.

What this script does is append the current time to the big query table that we previously created.

ENV PASSWORD=123 and ENV PORT=8787 are the environmental variables that we are passing to the new docker image. This is similar to the docker command that we previously ran, where we defined a password and a port.

With the following command, we are installing the package “bigrquery”:

This is important, otherwise when we’ll run the script we won’t be able to load the “bigrquery” package, as it doesn’t exist in the docker image.

With these commands we are adding the Service Account Key and the script that we’ll run. After the name of the files, we have added the folder in which we’ll save the files, in this case /home/rstudio. This will make sure that the files are available for our script:

Finally, the following command launches the script that we have added. In is important to define the entire path.:

Now, go to the terminal in R and type “cd” + your folder path. In my case:

In is important that the text file Dockerfile.txt and its associated files (Service Account Key and R Script) are all in that folder.

Now, go to the terminal and type the following command:

This will create a new docker image named “docker-tutorial” by using the instructions in “Dockerfile.txt”

Type the following command in the terminal:

This will show you the new docker image that you have just created!

Success! You have created your first docker image :)

How to run a docker container

As mentioned multiple times, a docker container is an instance of a docker image. Now that we have created our docker image, it is fairly easy to run our container. Go to the terminal and type the following command:

docker tutorial is the name of the docker image that we have created. If you now go back to big query, you should see a new current time appended (I have many as I ran it multiple times to test): 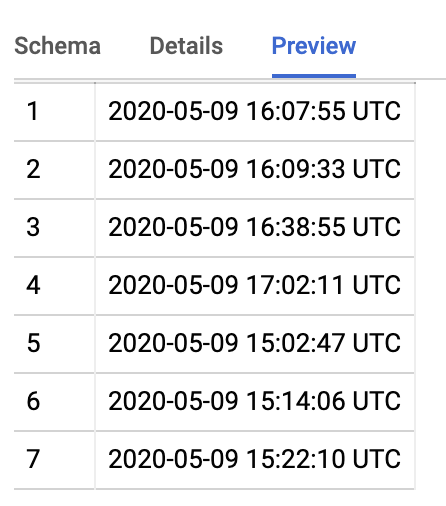 Now that we know that our docker image works properly, we can deploy it to Google Cloud. Yuppi! :D

How to deploy a docker image on Google Cloud

Before deploying a docker image on Google Cloud, you need to download the Google Cloud SDK and install it.

To do so, open a new a new terminal, it is better than using the R terminal.

Once you have installed the Google Cloud SDK, type the following command in the terminal:

Authenticate and get back to the terminal.

Then, you should type the following command:

This command contains the docker command “docker tag”, followed by your source docker image “docker-tutorial” (in your computer), followed by “hostname/project-id/local-image-name:tag”. “local-image-name” is the name that the image will have on Google Cloud.

This command will simply tag your docker image before pushing it.

You could have several hostnames, I have selected “eu.gcr.io” as I am from Europe. Here is a list.

Then, you should type the following command:

This command contains the docker command “docker push”, which pushes the docker image to the Google Cloud Cointainer Registry. Then, it is followed by “hostname/project-id/local-image-name:tag”.

I know it is not easy to remember these commands, so I have created a google sheet which concatenates the different elements. Make a copy of this sheet, replace the elements with your information and copy paste the commands.

Here we can see we are pushing the docker image to the Container Registry:

Now, go to the Google Cloud Console, type “container registry” and click on it:

You should see the docker image that we have just pushed:

Congrats! You have just pushed a docker image to the Container Registry! :D

How to configure the GoogleCloudRunner package

Install and load the “googleCloudRunner” package:

Follow the instructions on this excellent article written by Mark Edmondson.

How to create a cloud build by using a docker image

Now, go to the container registry and copy the full name of the deployed image:

Create a .yaml file with the following configuration. To create a yaml file download an editor such as Atom.

Here is a mockup example for me:

Once you have created the yaml file, put it in the folder used for this tutorial. Then, create a build with the following command:

When you run this command, a window should open and you should you see Google Cloud creating the build:

A cloud build is basically a container image that we can use for other purposes. Cloud build allows you to start docker containers.

How to schedule a cron job of our cloud build

Now that we have created our build, it is fairly easy to schedule it. We’ll create a cron job named “big-query-test”.

This command will create a cron job that runs our newly created build every 2 minutes!

Now, if you go on the Google Cloud Scheduler:

You should be able to see the cron job:

You made it to the end of this tutorial, congratulations :)

In this tutorial, you learnt:

You can now do wonders with this knowledge:

If you enjoyed this tutorial, don’t hesitate to connect with me on LinkedIn

Connect to Big Query through dbConnect & translate dplyr to SQL

Learn how to connect to big query & translate dplyr to SQL